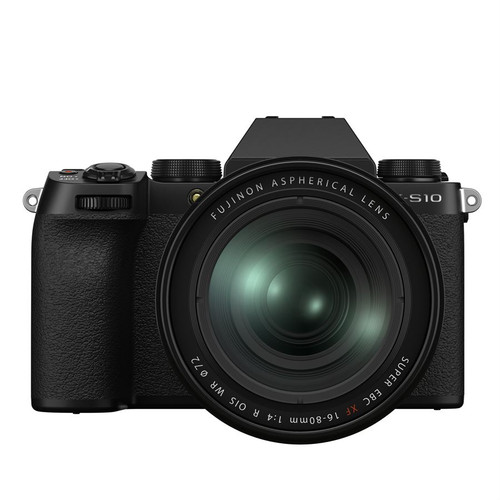 Well known for building sleek but super-powerful cameras, Fujifilm has excelled themselves with the Fujifilm X-S10 mirrorless camera body. This tiny-bodied camera is aimed at enthusiasts who want to limit the weight of their kit bag but still need stunning image and video quality. Unlike most other smaller-bodied cameras on the market that are just simply too small to operate efficiently, the X-S10 has a larger grip which allows effective one-handed and for you to be as accurate and efficient as you would be on a larger-bodied camera. To be able to construct such a small camera, Fujifilm has had to reimagine the internal layout and design smaller components. One of which is the IBIS system which is 30% lighter and smaller than the X-T4’s IBIS. The X-S10 is a true testament to Fujifilm’s designers and their skill and mastery of camera construction.

A new slim design which weighs in at just 465g. The sleek design sees a reimagined IBIS which is more compact and takes ideas from the X-T4 and X-H1 but still offers 6.0 stops of image stabilisation. Unlike some other smaller bodied cameras on the market, this camera features a new, bigger grip. Often we see smaller bodied cameras whose purpose is to reduce the weight of your kit bag, but they have grips that are too small making it difficult to effectively operate. But Fujifilm has equipped the X-S10 with a larger grip which makes it easier to use and offers more stability when using larger lenses. Furthermore, the grip features mode, front command and rear command dials which enable intuitive and ergonomic one-handed use. Finally, to add to the practicality of this camera, it also features a 180-degree vari-angle touchscreen LCD monitor. Combine this with the one-handed operation and you have a truly versatile camera system.

< p>As mentioned, this 5-axis IBIS system takes ideas from Fujifilm’s X-T4 and X-H1 camera bodies. Taken from the X-T4 structure, the X-S10 uses one magnet for sensing and actuating. And from the X-H1, one magnet for sensing and another for actuating. The reimagined system is 30% lighter and smaller than the IBIS featured in the X-T4 camera body; this is partly thanks to the redesigned circuit board layout that saves space and weight whilst maintaining high-power performance. But not only this, the motion sensor and shock absorbing mechanisms have been maximised for a powerful 5-axis, 6-stops of image stabilisation.

The X-S10 is slim in design, but its photographic and video capabilities are beyond impressive. The camera is capable of producing stunning photographs and video footage, achieved via its powerful 26.1MP X Trans CMOS 4 image sensor and X-Processor 4 processing engine. The camera features enhanced image quality when shooting on Auto and SP, as well as an improved autofocus performance enabling 0.02-second focus acquisition, tracking AF and face/eye AF. In addition, the camera can capture 8fps burst shooting using the manual shutter and a maximum of 20fps burst shooting when using the electronic shutter. When it comes to video, the X-S10 can capture DCI 4K at 29.97p, 200Mbps and 4:2:2 10bit recording using HDMI. Video recording is also complemented by a strong digital image stabilisation and IS mode boost, as well as a designated movie recording menu that allows quick intuitive access to all video settings.

Like all Fujifilm mirrorless bodies, the X-S10 features the widely celebrated Fujifilm film simulations.These simulations were created to allow you to enjoy classic, analog film effects in your digital photography. The X-S10 has been equipped with 18 exclusive modes, including but not limited to, ETERNA Bleach Bypass, which recreates a stunning and high-contrast feel and look.

The Fujinon XF16-80mm f/4 R OIS WR is a compact, weather resistant 5x standard zoom lens that consists of 16 lens elements in 12 groups. This includes three aspherical lens elements, and one ED aspherical lens to effectively control field curvature and spherical aberrations giving advanced levels of sharpness across the frame. Its inner focus AF system uses a stepping motor to drive the focusing group of lens elements quietly and quickly. The powerful OIS has an effective correction of 6.0 stops.

Powerful OIS
It has the strongest OIS performance equivalent to 6.0 CIPA-guideline standard. The camera automatically detects when it is fixed to a tripod or when panning, and adjusts accordingly.